After 25 years in solo practice in Chariton, Raymond C. Meyer joined with fellow solo practitioner Jenna K. Lain of Corydon to form the partnership of Meyer & Lain in January 2020.  Ray’s practice focuses on estate and trust planning and administration, taxation, and nonprofit organizations, including private foundations.

After law school, Ray was an associate at Arnold & Porter in Washington, D.C. in 1984-85 and then again in 1990-94, concentrating in the area of food and drug regulation and related litigation matters.  From 1985-87 he was an associate in the health law department of Dorsey & Whitney in Minneapolis, Minnesota, and from 1987-89 was a member of the Mayo Clinic Legal Department in Rochester, Minnesota.   In the spring of 1990, he was a visiting professor at the University of Iowa College of Law, where he taught first year contracts, before returning to Arnold & Porter that summer.  Ray returned to Chariton in January 1995 to join his family’s law practice in his hometown.

Ray’s family has been practicing law in Chariton since January 1942, when Ray’s father Virgil moved to Chariton from New Albin, Iowa.  Ray’s brothers Jim and Steve joined their father in the mid-1970s, and the three practiced together as Meyer Law Firm until Virgil’s death in 1993.  Ray returned to continue the hometown practice in 1995 a few months before his brothers left to become full-time corporate counsel for long-time family client Hy-Vee, Inc., in West Des Moines.

Ray is a member of the American Bar Association and Iowa State Bar Association, and also serves as a board member of several community organizations, including the Chariton River Greenbelt Foundation, Hotel Charitone L.L.C., Lucas County Development Corporation, Lucas County Historical Society, and Lucas County Preservation Alliance.  He previously served as a board member of the Iowa Healthiest State Initiative, Iowa Law School Foundation, Iowa Public Television Foundation, and the Minnesota Lawyers International Human Rights Committee.  He served in elected office on the Board of Trustees of Lucas County Health Center for three terms from 1999 until 2017 and on the Chariton City Council for one term from 2010 until 2014.

Ray and his wife Ruth Comer live in Chariton.

Jenna K. Lain was born and raised on a family farm in Hamilton County, Iowa.  She received her Bachelor of Science Degree in Agricultural Business and International Agriculture with a minor in Agronomy from Iowa State University in 2007.  While at Iowa State, she served as President of the Iowa FFA Association.

Jenna received her Doctorate of Jurisprudence with High Honors from Drake University Law School in December of 2009. Jenna naturally took a special interest in agricultural law, including real estate, taxation, and business succession planning.  She was Co-President of the Agricultural Law Association and was a staff member of the Drake Journal of Agricultural Law.  She also served agricultural law clients as a law clerk at Beving, Swanson & Forrest, P.C.  Upon graduation, Jenna received a Certificate of Food and Agriculture Law and became licensed to practice law in Iowa in 2010.

Jenna and husband, Justin, made the decision to return to Justin’s hometown of Corydon, Iowa, and farm with Justin’s family.  From 2010-2013, Jenna worked as an Associate Attorney at Chambers & Relph Law Firm. P.C. in Corydon where she served clients in a wide variety of practice areas.  In January 2014, Jenna founded her own firm: The Law Office of Jenna K. Lain, PLLC.

In January 2020, Jenna Lain and Raymond Meyer combined their solo law practices into the partnership of Meyer & Lain.  Jenna maintains her primary office in Corydon, Iowa and practices primarily in the areas of Estate and Trust planning and administration, Business and Succession planning, Real Estate and Agricultural Law, and Taxation.  Jenna is also a certified family law mediator and assists clients with guardianships, conservatorships and adoptions.

While away from the office, Jenna (and Justin) enjoy raising their three children on the farm, volunteering for numerous community organizations, camping and attending Iowa State University athletic events.  Jenna is a member of the Wayne County Bar Association, District 5B Bar Association, Iowa State Bar Association, Corydon Rotary Club, and PEO Chapter BR.  She serves on the Board of Directors for the Wayne Community Foundation and attends First Baptist Church in Corydon, Iowa. 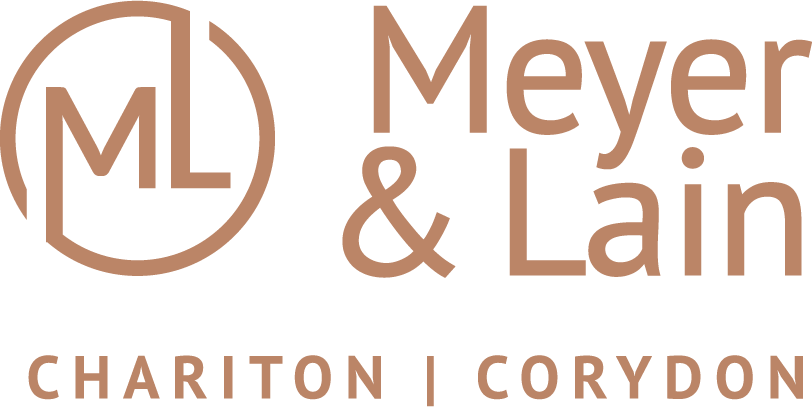